Spanning the Tajo River, the St Martin’s bridge leads to the town of Toledo in central Spain. Frank Brangwyn was fascinated by the dramatic appeal of ancient Roman bridges and he etched many throughout Europe. This etching was shown at the ‘New Zealand South Seas Exhibition’, held in Dunedin in 1925/1926. Brangwyn’s prints often have a distinctive decorative grandeur about them, as in this etching with its towering bridge and tree above the figures on the riverbed. Born in Bruges, Belgium, Brangwyn was the son of a Welsh architect. Early training by his father was followed by working in the London workshops of William Morris between 1882 and 1884. Brangwyn became active in many fields relating to the arts. He began exhibiting at the Royal Academy in 1885. During the First World War Brangwyn worked as an official war artist. He produced many murals, his most well known being on the British Empire, commissioned for the House of Lords (1924 -1930). Brangwyn was knighted in 1941. 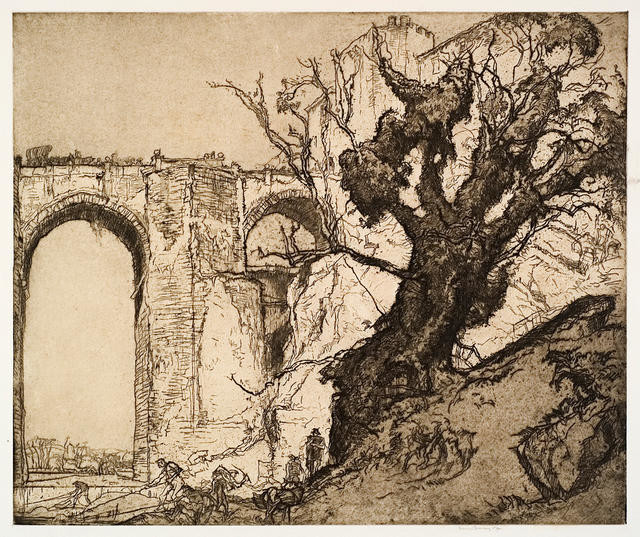