For many years this painting was considered to be a view of Kari Kari, a peninsula in Northland. It was first exhibited at the Canterbury Society of Arts annual exhibition in 1914 with the title A valley by the sea. It appears with this title as number 58 in the exhibition catalogue. It is recorded as purchased and added to the Society's permanent collection, with this same title, in the minutes of 17 March 1914. It is re-printed with the title A valley of [sic] the sea, Kari Kari, North Island, in the book The art of the British Empire overseas, edited by Charles Holme and published by The Studio magazine in 1917.

It is now known to be a view of Karekare, on Auckland's West coast, a site that is now famous as the setting of the 1993 film The Piano. In his book Landscape paintings of New Zealand (Godwit, 2006), Christopher Johnstone states: "the view Gibb painted is still very much as Karekare appears today, with the lagoon a prominent, though changing, feature. Gibb's viewpoint is from a position immediately below Cave Rock."

Born in Scotland, William Menzies was the son of the Canterbury painter, John Gibb. Initially taught by his father, he also studied at the National Gallery School in Melbourne. Gibb exhibited at the first Canterbury Society of Arts exhibition in 1881 and was actively involved on the council of the Society. However, he was also a member of Christchurch's Palette Club, formed in 1890 in reaction to the more conservative Canterbury Society of Arts. 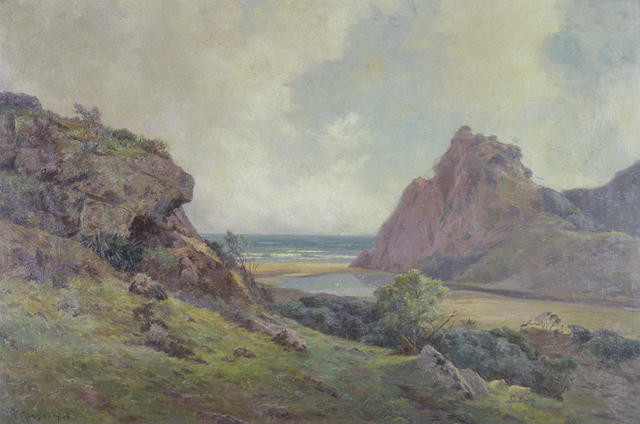