This intimate view of a cottage interior focuses on the mundane activities of a Dutch couple’s existence in a rural village. Petrus van der Velden painted many cottage interiors, based on those he had seen during his frequent visits to the island of Marken, in the Zuyder Zee, during the early 1870s. This genre painting probably dates from a later period, however. Van der Velden painted with the loose style of brushwork of the realist Dutch Hague School. However, the play of sunlight on the cottage floor makes this interior less sombre than a typical work from this School. Born in Rotterdam, Van der Velden established himself as a painter in Holland. In 1890 he and his wife emigrated to New Zealand. Van der Velden struggled to make a living in Christchurch, however, and went to Sydney in 1898. He returned to settle in Wellington in 1904 but died in Auckland while on a visit. 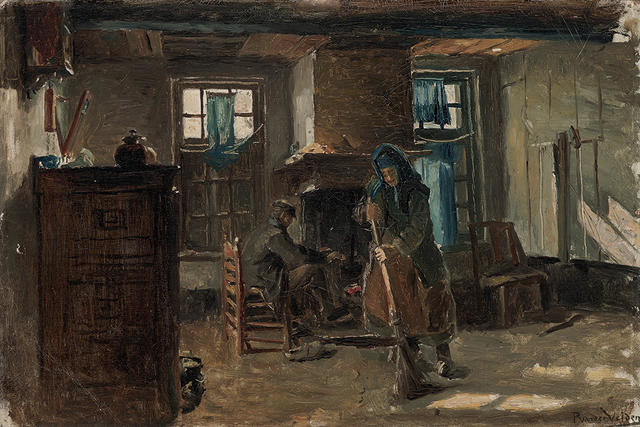