This work was displayed with this label on the occasion of Douglas MacDiarmid's death on 26 August 2020.

Douglas Kerr MacDiarmid was born in Taihape in 1922. After schooling in Marton and Timaru he studied in Christchurch at Canterbury University College and graduated in 1944 with a BA in English, literature and music. Encouraged to pursue his artistic talent by older, established artists including Evelyn Page, Rita Angus and Leo Bensemann, he became a regular exhibitor with The Group in Christchurch from 1945.

MacDiarmid first visited Europe in 1946. He held his first solo show at Helen Hitchings Gallery in Wellington in 1950, and his first in Paris in 1952, when he also settled there. He continued to exhibit in New Zealand and internationally throughout his long and exceptional life. This work was purchased from MacDiarmid’s second solo New Zealand exhibition at Barbara and André Brooke’s Gallery 91 in Christchurch in 1959.

MacDiarmid was summed up nicely by curator and author Jill Trevelyan: “Douglas seems to have filled in a dozen normal lives in his ninety-something years. Some people are just born with more gusto, curiosity, capacity for adventure, aren’t they?”

Expatriates One and All 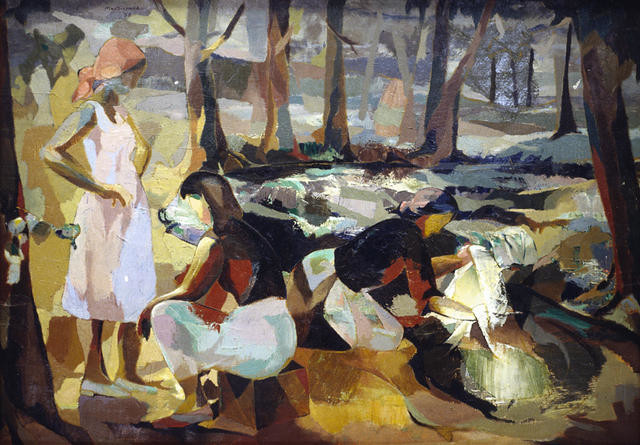