Eleanor Hughes was born to Cornish parents living in Christchurch. Her family was artistic, and she and her siblings studied at the Canterbury College School of Art. Eleanor began exhibiting with the Canterbury Society of Arts in 1902, and in 1905 travelled to England for further studies. She briefly returned to New Zealand, but in 1908 went back to England to continue her studies, joining the progressive Newlyn School in Cornwall. She married her fellow student, Robert (‘Bertie’) Morson Hughes, in 1910, and later that year they were in Christchurch, presenting a joint exhibition at the CSA Gallery in Durham Street. Back in England in 1911, they settled and became part of the newly-formed artist colony at Lamorna in Cornwall. They lived at ‘Chyangweal’, near St Buryan, above Lamorna Cove, for the rest of their lives, and Eleanor Hughes’s studio was in Lamorna Valley, about a mile from the house. This luminous watercolour landscape, was painted from an elevated position, looking across freshly cut fields and yellow haystacks to the purple heather-covered hills beyond, with the top of the granite quarry that dominates the Cove just visible. 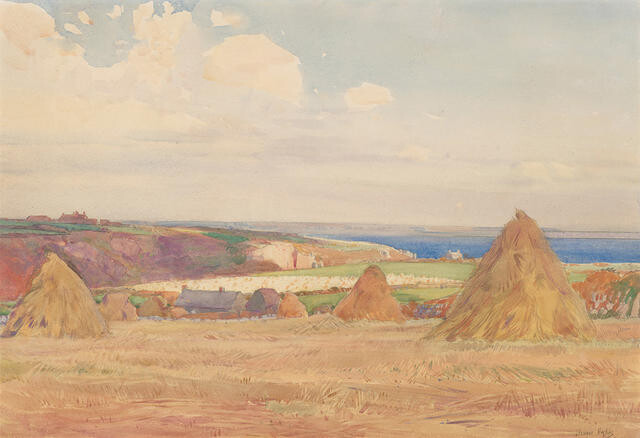