A revolving sculpture made entirely of blood-red steel, Target was inspired by visions of the harsh metal barricades of war. It is a deliberately edgy work that refers to those people who make themselves targets through their actions and beliefs. The tautly crossed metal spars are confrontational and militant, symbolising a clenched fist raised against the world. This bold statement of intent is also a dangerously conspicuous invitation for persecution. Activated by the force of the wind, Target offers the potential for unpredictable movement, resulting in varied interactions with people who pass by. Watson, who has developed a body of kinetic sculptures, describes his method of working with 'invisibles' like wind and gravity as 'a dance'. Target's tight revolutions encompass a full 360 degrees, acknowledging that attack can come from any direction. This work was included in the third biennial 'Sculpture in the Gardens' exhibition in 1997, a project jointly organised by the Robert McDougall Art Gallery and the Christchurch Botanic Gardens. Fittingly, Target was situated on the Archery Lawn. Watson was born in 1961. He received a Diploma in Craft Design from the Christchurch Polytechnic in 1993 and has worked as both a technician and a tutor for that institution. He received the Fiesta Products Award for Craft Design in 1993 and in the following year was awarded the Queen Elizabeth II Arts Council New Craft Artist Grant. Watson has participated in individual and group exhibitions throughout New Zealand. 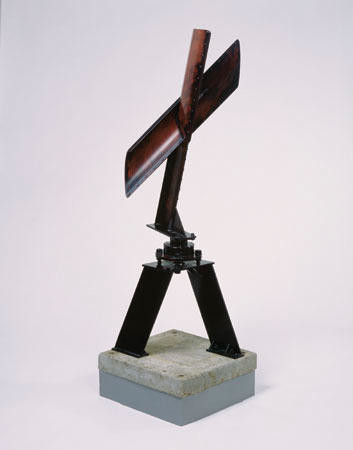