We leave Aotearoa New Zealand today with an American poet and an English painter, brought together just for fun. Grasses by Aileen Fisher (1906-2002) is read by Karin Bathgate who works as a Visitor Host here at the Gallery.

We hope it makes you smile for the full 20 second hand-washing routine.

Lucy Kemp Welch In the Orchard [also known as Sunlight through the Leaves]
Collection of Christchurch Art Gallery Te Puna o Waiwhetū; presented by the Canterbury Society of Arts, 1932

We are grateful to The Permissions Company on behalf  of the Estate of Aileen Fisher for permission to reproduce this poem. 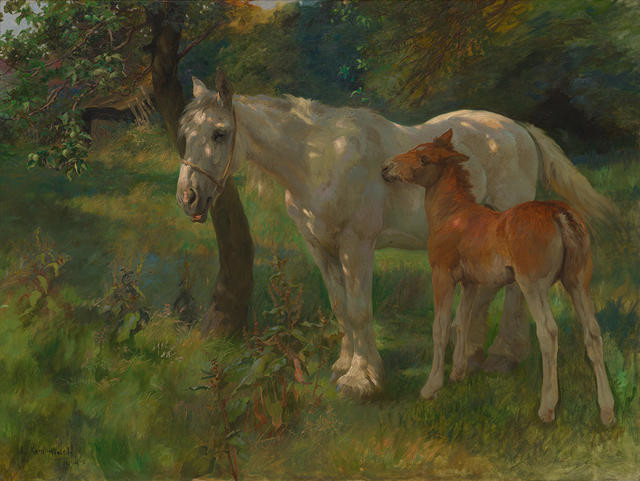 British artist Lucy Kemp-Welch launched her career as a leading animal painter while still in her twenties, and painted this work not much later, in 1905, when she also took over the running of the art school where she’d studied. Operating from behind “a very interesting house in the old High street” in the village of Bushey near London, she became the first woman principal of a British art school to teach both male and female students. Her own studio, in which she made this sun-drenched painting of a horse and foal, was built in a paddock, where the artist kept a couple of New Forest ponies. It had a tall glass annexe with a grass floor, so she could study her animal models regardless of the weather outside. Kemp-Welch became the most famous horse painter of her day, and also made paintings for a popular version of the book Black Beauty by Anna Sewell.