"One day, from up on the scaffolding where I was working on the Burghers of Calais, I noticed Rodin, who between some scenes, was doing a nude sculpture, for which the model was a young woman, stretched out on the table. As the session was drawing to a close, he bent over toward the woman and kissed her tenderly on her belly - a gesture of adoration of nature, which gave him so much joy." 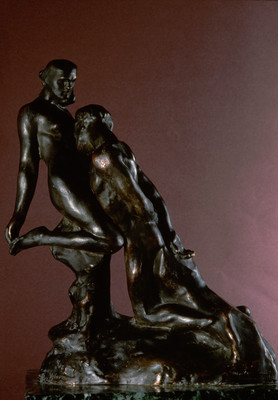 The memories of Rodin's assistant, Jules Debois, of one of the 20th century's greatest sculptors at work has a tangible echo in Christchurch Art Gallery's Collection.

The Gallery's Collection contains two Rodin bronzes, Eternal Idol and Psyche, gifted to the gallery in 1964 by the New Zealand Government.

Born in Paris in 1840 Auguste Rodin was one of the most significant sculptors to emerge in Western Art in the 19th century.

As a student he was refused entry to the Ecole des Beaux-Arts and was instead forced to study at the Petite Ecole - a school of decorative arts which did not offer drawing from the nude, a subject he was to excel as a sculptor. His career began as a designer and modeller of decorative sculpture.

A consistent theme in Rodin's work is the inter-relationship between male and female, an important and popular example of this theme being Eternal Idol.

Completed around 1889 Eternal Idol signifies Rodin's reverence for the female body, in which the restrained male, with arms behind his back kneels before the woman kissing her tenderly below her left breast, over the heart.

Eternal Idol was purchased by the New Zealand Government in 1962 along with another Rodin sculpture, Psyche and a large tapestry, Le Ventian by Jean Lucrat, with the residue of a New Zealand fund held in France.

The New Zealand Prime Minister at this time, Keith Holyoake, saw the purchases of these three art works as important acquisitions for New Zealand as "we are unable to enjoy directly many of the great artistic masterpieces of Europe but these works will enable the New Zealand public to see something of French art," he said.

All three works were toured throughout New Zealand between November 1962 and January 1964.

On their display at the former Robert McDougall Art Gallery in July 1963 the Press reviewer, J.N. Kenny, was not as confident at the Prime Minister of the artistic merit of the Rodin bronzes. "Neither of the tiny Rodin bronzes are of great consequence; they look like posthumous casts from wax sketches."

The reviewer did appreciate the sculptor's skill commenting that "both of them do give an indication of the fluid, sensuous quality of Rodin's modelling." The Christchurch Art Gallery's two bronzes are, in fact, posthumous casts made by the Musee Rodin in Paris from the original wax marquettes held in that institutions collection.

Both were cast at the foundry of George Rudier in Paris, the same foundry Rodin used in his lifetime, Eternal Idol in 1959 and Psyche in 1961. As recent as the 1990s the Rodin Museum was issuing new castings of Rodin's work. 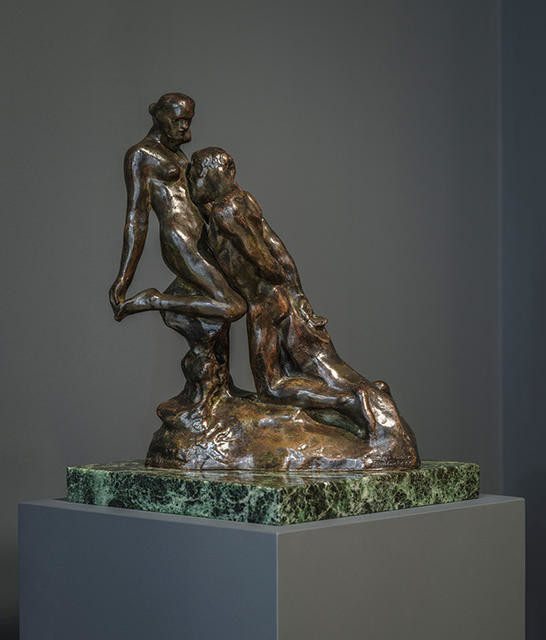 The embracing couple was a motif sculptor August Rodin returned to throughout his career. Here, a man adopts a posture of ardent reverence, kissing a woman on the stomach while kneeling with his arms held behind him. She appears to pull him closer with one hand, while the other touches her own lifted foot. This fluid bronze embodies the values of the Romantic movement of the nineteenth century, which emphasised sensual impact and personal expression. The apparent mutuality of attraction and power balance expressed here can be contrasted with how heterosexual couples were often depicted in the classical art tradition, with female figures as passive muses or powerless victims of sexual aggression. 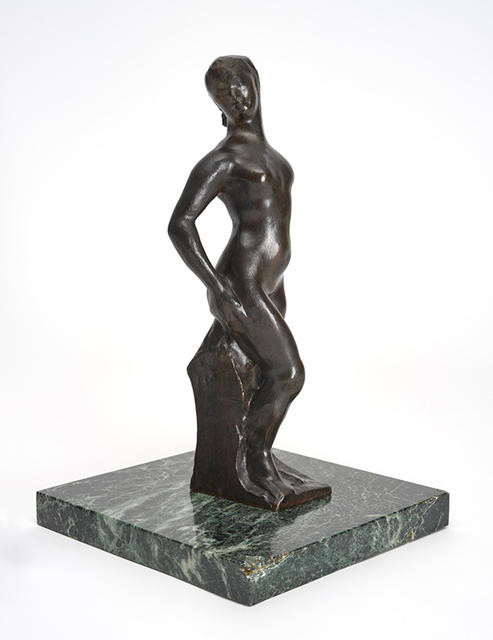 Psyche, in Greek mythology, was a mortal princess whose beauty attracted the attention of Eros, the god of love, and the jealous anger of his mother Aphrodite. The renowned Parisian sculptor Auguste Rodin worked on variations on the theme of Psyche between 1886 and 1905. This bronze is a later casting, produced by the Musée Rodin at a foundry in Paris in 1961.

Psyche was purchased by the New Zealand Government in 1962 through a fund established to strengthen learning and cultural relations between New Zealand and France. After being exhibited in Christchurch in 1963, this city became the sculpture’s permanent home.