I had arrived at the train station roughly an hour and a half early. It was a frosty morning and my hands felt like ice blocks. I had that nervous gut feeling again. I peered at my army uniform and pressed down the creases, war was certainly not wanted on my agenda today.

I had been enlisted to serve in the war a few weeks back and for some reason, only now were the nerves starting to kick in. While I was seated I tried to do something to distract my mind for the time being. The men were soon to arrive and I knew this would be the last time I could just think and observe without noise for a long time. That's when she caught my eye.

She was seated across from me, her right cheek rested in her right palm, elbow planted on a table that was off balance. Every subtle glance I took I noticed her trying to stabilize the table leg by placing her handbag strap underneath it. I smirked at the attempt to stabilise the table and she glanced up as I did. Never had a woman taken me off focus like this before, I could not seem to take my eyes off of hers. I did question her reasoning for wearing fluffy earmuffs with a fluffy hat but then a silk short-sleeved summer blouse in the middle of winter. Perhaps she was a little confused this morning. She was definitely not happy, her eyes were someplace else and this intrigued me. I wondered what was wrong. Perhaps someone had passed away? From what I could pick up on she was dazed and overpowered by sadness, I could just sense it slowly eating at her from across the train station. Her far away daydream made for droopy eyes, as if she were about to fall asleep. Her focus remained set for at least 2 minutes before she rested her head completely on the table and let out a long sigh. I yearned to know what she was thinking. A quick moment of eye contact took place until my shy nature kicked in and I peered away, although my eyes fixated right back to her when she had returned to her daydream.I tried to find a spot where it was even the slightest bit warm. The short-sleeved blouse I was wearing did no justice for the icy air at all. I had arrived at the station so late that I had missed my train, this meant for roughly an hour and a half wait for the next one, which in all honesty I did not mind at all. Nothing surprised me anymore. When the lady told me I had missed it I just dragged myself over to the waiting room, took a seat and stared into space. I felt so tired, as if all my energy had just poured itself down a drainpipe and I just had to stand and stare at it helplessly as it did so. Heartbreak was so new to me at that point, like nothing I had ever experienced before, and it was truly eating not only at my heart but my brain too. He had ended it the night before my arrival at the train station. It was a brief phone call while I was on a holiday with my friend, much to her disappointment I had to tell her I was going home. I needed the comfort of my own bed, the comfort of my own family. So four buses later I had arrived at an unfamiliar train station full of more unfamiliar people who had to witness my unapproachable self. It was then while I waited in my own bubble of sadness that I noticed a young man across the room peering at me, not subtly at all I might add. The concept of a boy staring at me while I was feeling this way urged a lump down my throat to my stomach, uncomfortably comfortable. I was numb to the slight attention of this young man who appeared to be wearing an army combat uniform – a justification for his situation at the train station. I didn't feel like being noticed, I wanted to be invisible just for that day, just until I was home in my bedroom. But he didn't know that so he continued to peer up at me, which I suppose deep down sort of flattered me - he did have wonderful green eyes. I imagined myself collapsing to the floor of the train station. I contemplated how the people of the train station would react, how the boy sitting across from me would react. As my daydream faded in and out and my level of consciousness felt like it was decreasing he was approaching me, the mysterious boy.

She looked unaware of me walking towards her, but she was looking right at me. I had to do it, I knew I'd regret it if I didn't even find out her name. So I introduced myself and took a seat. She didn't seem to mind, in fact she was rather welcoming. She told me her story, the reason she was at the train station. I told her she seemed wonderful, that the lad who had dumped her was unworthy of her beauty anyway. I created a smile on her face, and it was warming. We exchanged addresses and I promised to write to her while I was away at war. As I walked away I realised I didn't even catch her name, only an address, but I was much too shy to return to her. I think she saw me stop mid walk because I nervously glanced back at her and she smiled as if she knew. I knew I couldn't send her a letter without her name stated on the envelope, and I felt like such a fool. But much to my advantage as I was seated on the train I heard a quiet tap on the window that I was leant against. There she stood with a grin on her face and a pressed piece of paper to the glass that said: 'Suzette.' 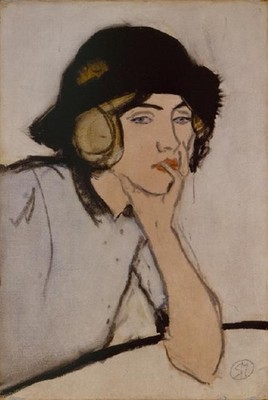