'John, Robert, I have a job for you.' The male human looks small and puny next to my brother's large frame. He continues, undaunted by our size. 'How would you like to get a job in the city? The pay is good, and you wouldn't need to do anything other than stand still and let people stare at you.'

I looked to my brother, Robert. He was very much like a human gnome, except twenty times larger and made of polished steel. I could see my reflection in his shiny chest, an identical twin. 'I don't want any grubby humans messing up my shine.'

The little human hurried to reassure me. 'Nobody will be touching you except for the cleaners, and they'll just polish you up and leave you alone.' The idea of having humans bowing down to me and polishing my skin attracted me. It gave me a warm feeling inside. 'All right, we'll take it.' I did not need to refer to my brother on this decision, as our minds were identical in every way.

The human beamed with delight. 'Fantastic! Now, if you'll just follow me...'

We scurried through the city in the dead of night. All was quiet, except for the sounds of our footsteps. We passed through a huge park, the botanical gardens, the silver moon casting an eerie light over the looming trees and flower beds.

Soon, we encountered another statue. It was a man cast in bronze, standing stiffly on his pedestal. He had bird droppings on his head and shoulders. I asked the human, 'What's wrong with him?' the bronze man answered my question indignantly, even though I hadn't been asking him. 'Those bastard humans nailed my feet to this stupid hunk of rock, and every day those damned seagulls use me for target practice!'

There was more like this, but we didn't stay to listen. Our human hurried us away, chivvying us along because the sun would be up soon. I was starting to have second thoughts about this job. Would they nail us to the ground and let the birdies and dogs poop on us? I stopped, forcing the human to do likewise.

My brother asked the human 'Is that what's going to happen to us? Nailed down hand left for the birds to use as target practice?' the human shook his head frantically. 'No, I assure you, you will receive better care. That statue's not looked after very well because he's hidden out of sight. But you two will be a prominent display in front of the city's art gallery. Nobody wants dirty art in such a public place.' He saw our doubtful glance. 'It's true! You can ask the other sculptures they have there, they're all very well cared for. Honest!'

In the morning, the residents of Christchurch gazed in wonder at the two gnome statues, sunlight glinting off the freshly polished metal. Children tugged at their parent's hands, pointing at me or my twin.

I struggled to keep a straight face and to hold still. The temptation to suddenly roar at the humans and make them scurry like ants back to their homes was almost overwhelming. I knew then that I loved this city, with its multitude of gardens and wide spaces, with the inventive gap fillers that replaced building that had been reduced to rubble. I wouldn't give up this position for the world, the view was that entertaining. Humans were a much more interesting race than I had first thought. 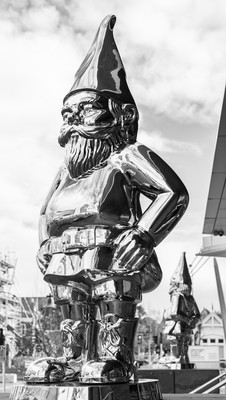