Before a vast crowd assembled in the street before him, the might leader Ronnie van Hout salutes to the crowd and sky, his arm stiff and huge above his body. While his little black eyes wince in the sun his face is screwed up in concentration and the crowd are roaring in approval and adulation.

His aide-de-camp addresses the microphone with the dignified manner of someone relying on their title and office for authority. 'Listen everyone to the titles of our protector and father who will shortly address you. He is Ronnie van Hout the Governor General of the Plains, the President of the Council of River Suburbs, Chairperson of all Committees of Square and City, Proclaimer of the Green Frame and Red Zone, and Supreme Commander of all Hydraulic Wrecking Machinery.' Ronnie lowers his arm and the crowd settles to hear his voice.

'Hear me you vanquished, of homes rent asunder, of split ground and shattered cliffs, those dispersed from their houses and suburbs, hear me you who quiver in the shaking tremors of the gruesome strength of the ground, hear me as your feet stand steady on the streets below me and be thankful. Those of you with insurance premiums paid and in the Red Zone shall under my compulsion take Option One or Option Two, which by my merciful power and supreme wisdom is available to you. But beware you who if in your folly decide to remain in an undamaged home. If it is declared by me in the zone of redness you shall be evicted! You will forgo my options of generous giving and be forced to go from these lands with very little recompense. Furthemore those of you found lingering in what I have declared the green frame, whether with operational hotels or gracious Victorian warehouses, be they seismically strengthened or not strengthened, damaged or undamaged, functioning or empty, you will be punished for your lingering and doubt. Move now under the protections of the state! If not, the options of compulsion will avenge you with fury and might equal to the earthquake itself!'

As Ronnie reaches to the sky and salutes again, the crowd roar and shout their approval. His reedy voice fills the street, bouncing off the buildings and falling on the men and women like hail.

'Look where I point, to the vacuums of the atmosphere and the light spaces that hand down to me the truth by which I rule and judge. It is right that you spend your insurance moneys now by sinking foundations into the rolling round rocks of the river plains. Spread your reinforced concrete pads over the Riccarton Gravel Layer that was spewed and splayed by the Waimakariri in ancient times on its natural course to the thunderous Pacific! Find land in the subdivisions of Yaldhurst and Northwood, rest not in the squirming mudflats of the Eastern River Suburbs. Go now in my velvet command and completeness of authority, and in the golden handcuffs of your insurance policies. Seek solace amongst safer streams and waterways, under the blue vaulted dome of this sky harder than marble, disperse now to the plains and find new rows of willow and poplar that will yellow in the Autumns of our long lives. Go where jet boats flash in the braided shallows like salmon leaping, and build without fear! Even within sight of the sharp could piercing rocks of the Alps, whose secret coiled tension radiates outwards across the wide plains, build, for you are protected!'

Ronnie lowers his arm, smiles and surveys the crowd as their grateful cheers fill Tuam street and rise echoing to his rooftop aerie. 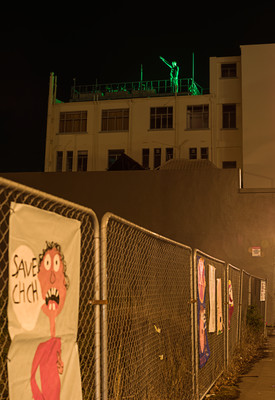