More moments to treasure emerge from our digitisation of early Gallery exhibitions.

In 1966, the exhibition Aspects of new British Art ran at the McDougall and one of the works was this piece by Brian Wall, entitled Broken white. 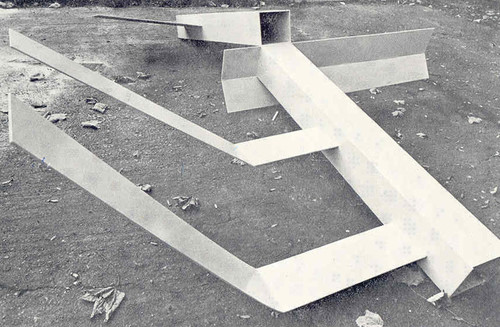 The Gallery director said this show was 'the most difficult, in terms of [the] size and shape of the pieces' that he had ever had to handle (Star, 23 November 1966). Wall's work was described, with more than a hint of a sneer, as resembling a cross between an air duct system and an earthmoving machine.

It's hard to gauge the exact size of the work from the picture, but the leaf in the foreground suggests perhaps a three-man lift. How times have changed over the last forty years.

We've had quite a bit of gigantism ourselves lately, with a supersized pregnant woman, an inflatable rabbit whose ears scraped the ceiling, and marine debris that filled an entire gallery. The daddy of them all of course was Callum Morton's Monument #24: Goodies, the only work in the De-Building catalogue to be measured not in centimetres but in metres.