On 22 February, Christchurch Art Gallery's new building facilities coordinator Brad Adlam had been in his new role for only a week.

Within an hour of the earthquake striking, the Gallery had been converted into the Civil Defence headquarters. From that point on, Brad worked 12-hour days to ensure there were adequate lighting, heating and humidity levels in the Gallery, not only for the more than 400 staff suddenly working there, but also to protect the city's precious art collection housed in the building.

While the whole central city was shut down, Brad, who was still learning how the Gallery systems worked, had to figure out how to make the Gallery function so people could work in the building. With the help of visitor services and facility manager Lynley McDougall, corporate support operations manager Mike Heinemann, City Care and other contractors, Brad quickly came to grips with it. 'We were trying to get each system (heating, air conditioning, the diesel generator and lighting) up and running and then we had to figure out how to keep it running,' he says.

The Gallery's back-up generators kicked into action after the earthquake, ensuring it had power and therefore lighting, but there was no water. The Gallery must be maintained at a constant temperature of 20-21 degrees and at a precise humidity level to keep the art safe, so Brad had to figure out how to get water circulating to feed the air conditioning unit and the boilers that produce the steam needed to regulate humidity in the building. With the help of City Care plumber Paul Johnstone, he established a temporary water supply in the basement and built a makeshift pump, which the pair managed to connect to the air conditioning unit and boilers on the roof, five floors above.

As Gallery staff worked to clear spaces to make way for Civil Defence staff, Brad was also busy trying to ensure there was adequate lighting for them. He says, 'Because it's not an office building it's set up to light the art, not the rooms – we had to look at how the lighting could be changed. This meant installing more lighting in some of the areas.'

Lynley says having Brad in the newly created role has been amazing: 'To say he has been thrown in at the deep end is an understatement. Brad has effectively been co-ordinating contractors to get the building functioning effectively for 400-plus staff while being constantly mindful of how the influx of people has been affecting the building and the art.' 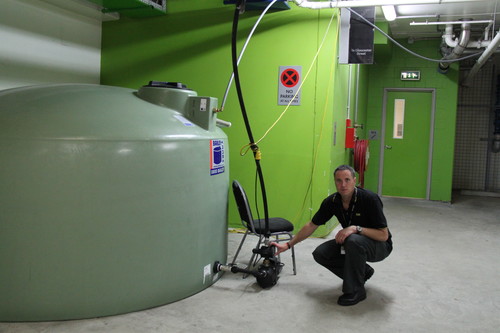