Although Séraphine Pick has featured in past group shows at the McDougall, and is represented in the Collection, this will be her first solo exhibition at the Gallery.

Pick was born in the Bay of Islands in 1964 and graduated from the School of Fine Arts at the University of Canterbury with a Bachelor of Fine Arts (Painting) in 1987. In 1994, she received the Olivia Spencer Bower Award, providing her with the financial freedom to concentrate entirely on painting. In the following year, she moved to Wellington to take up the Rita Angus Fellowship. These two awards have had a significant impact on Pick's painting, with the time away from her secondary career as a teacher allowing her greater development as an artist. In both cases, she was able to produce a substantial body of work which built upon her past style and explored new challenges. In the years since 1994, Pick's work has moved through several distinct stylistic phases and the exhibition at the McDougall Contemporary Art Annex will bring together representative works from each.

Pick's early work employed imagery sourced from significant moments in Art History, making particular use of the Gothic emblems of the Medieval period. By 1994, however, she had developed her own distinctive and captivatingly personal iconography. Works from this period have been described as 'dreamscapes' in which symbolic images from Pick's memory (beds, dresses, pincushions, colanders) float surreally across rich surfaces. These strangely dislocated objects were often domestic in nature, indicating the special significance memory can inject into otherwise everyday objects.

Shortly after making those works, Pick travelled to Europe, where she found she was again overwhelmed by the immense history of European art. When she returned to New Zealand, she began painting in a very different way, using figures and objects sculpted in the round with greens, blues, warm pinks and browns to explore a new-found sensuality and flesh out a gentle, often nauve eroticism.

Pick's newest style is a sophisticated fusion of these two approaches, combining a flattened painting surface with figurative elements which have moved closer than ever to the foreground. One constant feature of Pick's painting throughout the years has been the spidery drawing she scratches into the viscous surface of her canvases. This finely etched calligraphy is retained in her most recent works, contributing to a dreamlike atmosphere of delightful irony.

Drift North features five artists, all graduates of the Canterbury University School of Fine Arts, who now live and practice in Auckland or Wellington. 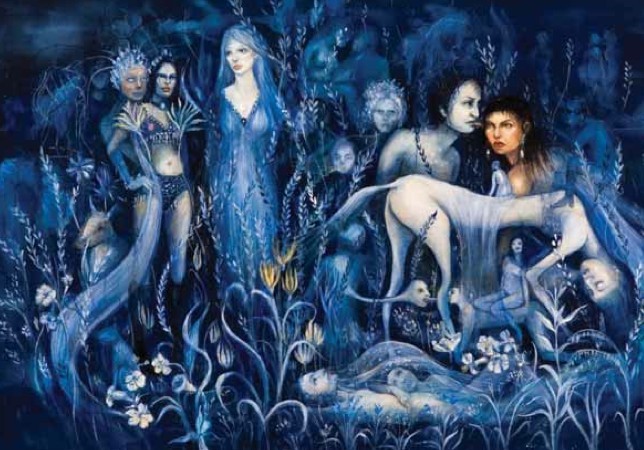 The celebrated faces gracing two of the paintings in Séraphine Pick's Brooke Gifford Gallery exhibition late last year wore expressions that were hard to pin down. Defensive, evasive and devoid of their customary charisma, the only thing they clearly conveyed was their wish to be somewhere – anywhere – else.