The Buried Army of Qin Shihuang

In 1984 a New Zealand cultural mission visited China at the invitation of the Chinese Government. The intention of the visit was to open negotiations between the two countries for an exchange of cultural programmes. Consequently three representatives from the arts in New Zealand were asked to explore our interests in China.

Elizabeth Airey represented the Music Federation, Harry Haythorne, the Royal New Zealand Ballet, and Rodney Wilson was asked to examine exchange possibilities for the visual arts. As some of you will know, the New Zealand Ballet has toured China, but more exciting for audiences here, Dr Wilson was able to negotiate, with the Chinese Cultural Bureau, for an exhibition of pieces from the astonishing discovery, the guardian army of Qin Shihuang, the First Emperor of China. This extraordinary man had intended that his dynasty should last for "ten thousand generations". It lasted a mere 15 years.

However, in that short time he made changes that have affected China's history to the present day. He passed laws which standardised measurement, weights and currency. He introduced Legalism. Qin Shihuang was the first of the book-burning dictators. He was responsible for destroying both the intellectuals and their books in order to carve out his powerful state. A man of great superstition, Qin Shihuang was brutal and ruthless. However, in the mind of the Chinese his ability to achieve things was praised. Indeed, Mao Tse Tung after nearly two thousand years, reassessed this unpopular ruler and claimed to emulate him with many of his edicts.

The tomb diggings at Xi'an in north-western China have been described as the 'eighth Wonder of the World'. They evidence the immense drive and power of the man who was also responsible for completing the Great Wall of China.

This exhibition, which will comprise two horses, nine warriors and 22 associated pieces including weapons and pottery, will give New Zealand people, not fortunate enough to travel to China, artistic and technological glimpses into that most impressive culture. The exhibition will include an audio-visual video programme shot in China and a slide-tape presentation of images of contemporary China.

An in depth publication by Arthur Cotterell is being especially reprinted for this New Zealand exhibition and the Auckland City Art Gallery is producing a beautiful full colour catalogue and posters. There will also be replicas of the horses and warriors. It promises to be a great feast for everyone. 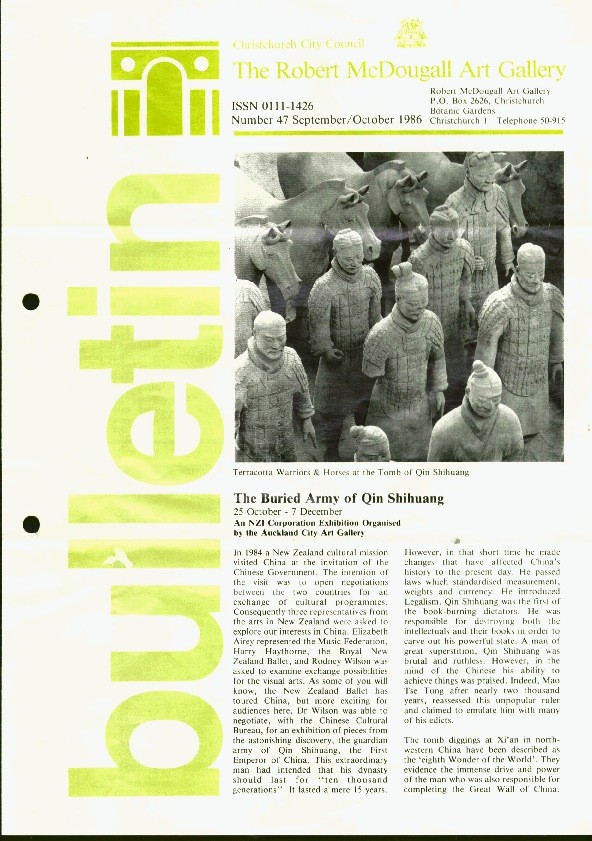