In creating these visually arresting abstract panels, Yvonne Sloan has adapted the twill weaving technique. The inspiration for her work comes from the structure of the weave and the interplay of colour created by the criss-crossing of threads. Sloan says she has made her motifs increasingly abstract so that the structure and the design of her work reinforce and enhance each other. Sloan has contributed significantly to the acceptance of craft weaving as an art form in New Zealand. Sloan was born in Auckland. She began weaving in 1963 while she was an Art and Craft Advisor for the Department of Education. She went on to study weaving at Satergiantan, Sweden, in 1966. Back in New Zealand, Sloan and her husband, Ian Spalding, established a professional weaving partnership in 1977. Sloan has received many awards and commissions. In 1994 she was artist in residence at Waikato Polytechnic and in 1998 she was invited to exhibit at the Crawford Art Centre in St Andrews, Scotland. 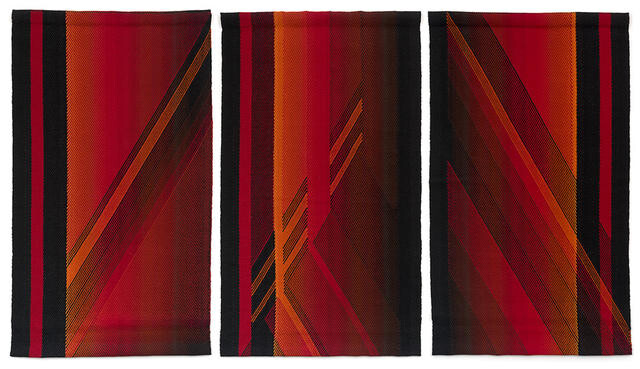