This late sixteenth or early seventeenth century British print is from a set depicting the five senses. The Wellcome Collection has three different versions of a matching print depicting 'feeling' in which a surgeon operates on a man's head, probably as a treatment for madness. (See Wellcome Library 583663i). It also carries four lines of doggerel:

Feeling of e'ry sense the best/ is thus indeed the most distrest/ No! man 'tis hell it self to feel/ instead of girl, the surgeons steel

Several sets of prints of the five senses have been identified. The book 'A Compleat Delineation and Description of the Several Regions & Countries in the Whole World', printed and sold by Robert Walton (1618-1688) in 1661 carries an advertisement (item 11) for a set of prints called 'The merry conceited five senses', also published by Walton, and it seems highly probable that this print is from that set, though possibly from a later edition.

With thanks to Simon Demissie at the Wellcome Library for assistance in interpreting this work.

See the matching print, Feeling, in the Wellcome Collection. 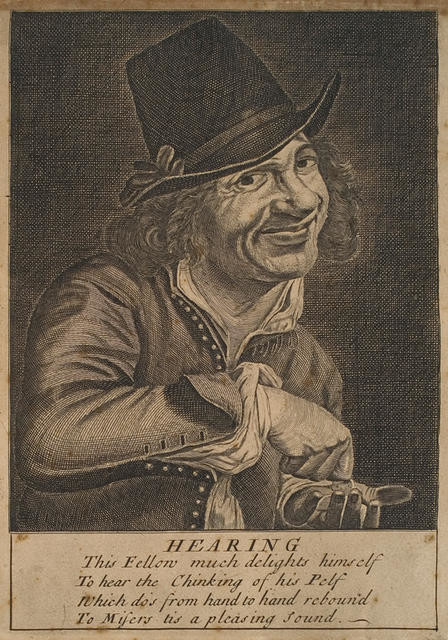