Exactly where this river crossing took place is not known, but in 1785 William Daniell and his uncle, Thomas Daniell, based themselves in Calcutta and Bhagalpur and over the next nine years traveled to northern India, Ceylon, the China Coast and Java. Orientalist subjects were popular with art audiences in Britain at that time and the Daniells’ work proved very successful. They were the first British artists to visit many Indian locations and their paintings of the scenery and architecture in these regions aroused a great deal of interest. William was born in Chertsey and trained under his uncle. When in 1794 they returned to England from India, William began working on the 144 aquatints that were used in Oriental Scenery and the further 50 works for A Picturesque Voyage to India by Way of China, published by both him and his uncle. William was elected a member of the Royal Academy in 1822. He made numerous tours throughout England and Scotland and also published Voyage Round Great Britain.

[This scene is now believed to be the rock fort at Trichinoply with the river Cauvery in the foreground. These are now known as Tiruchirapalli and Kaveri respectively. Daniell travelled in India between 1786 and 1793.] 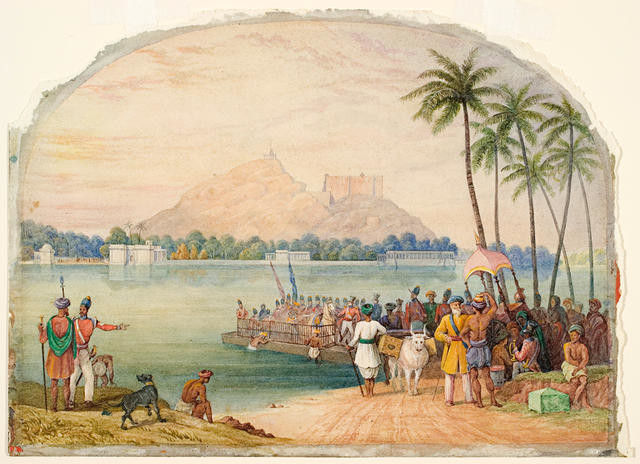