The screenprint Blue Flavour was originally a photograph, taken as part of the project Ground Water Mirror (2017-18). Conor Clarke (Ngāi Tahu, Irish, Welsh) named this body of work after a mistranslation of the German term 'Grundwasserspiegel', or water table, as it relates to different ideas around fresh water. She says, “Aside from water's obvious mirror-like qualities that resulted in my translation, there is an expectation that follows contemplation of water–for it to provide a solution to the questions or anxieties we project onto it.”

Now based in Ōtautahi, Clarke lived in Berlin for ten years and this particular work came out of a conversation in a Berlin ice cream shop: ‘I asked about the flavour of blue ice cream (it's very common in Germany, it has many names and slight variations on flavour... blue sky, blue angel, Smurf, Waldmeister, bubblegum, etc). My question was left unanswered. The blue ice cream was simply, apparently, "blue flavoured".’

Clarke had been thinking about the romanticized concept of Nature and the nature of perception, the thoughts and feelings that we ascribe to our environment. This flavour was not taken directly from anything in nature, a fruit or herb, instead was simply the flavour of a colour. Here we see the ice cream cone captured at the moment of melting across her hand, a slowly dissolving ideal. It reminds us of other things melting, like our polar ice caps. As a companion to another work from the series, I didn’t feel it till I saw it, both of these works show the conflict between an event and our ability to perceive it happening.

This work was purchased from the Ilam Campus Gallery limited edition artist prints 2019. 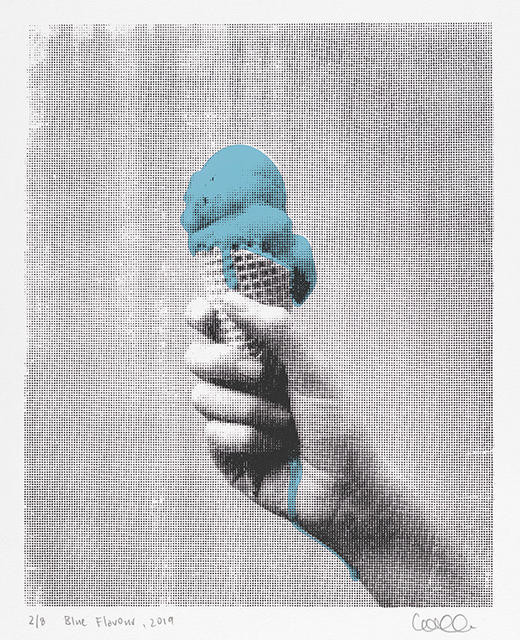