The multi-layered worlds Andy Leleisi’uao creates within his paintings are often inhabited by unexpected, transforming creatures that slip fluidly into new states and situations. That’s especially true of 'Dispersed Humanoids Parts I and II'. Animals with human faces, a caterpillar in its chrysalis, tiny UFOs and multiple free-floating eye-balls all make an appearance within its strange assortment of extinct and imagined forms.

The New Zealand-born son of Samoan parents, Leleisi’uao has spoken of feeling suspended as he navigated the differences between Fa’a Samoa (the Samoan way of life) and the traditions of his family’s adopted country. He often played board games as a child, and references to physical and mental challenges can be found throughout these paintings; heads filled with puzzle pieces, entwined knots, yet-to-be-solved crossword grids. Even the lattice of squares and rectangles that dominates each large canvas suggests the steady progressions and unpredictable tumbles of a Snakes and Ladders game. Leleisi’uao uses these symbols of child’s play as a lead-in to the adult business of work – the kind that pays the bills, but also the kind that brings you purpose. Though he always wanted to be an artist, he took factory jobs to support his family, and references to time passing slowly – endless tasks, hours crossed off in increments on a wall – feature regularly in his paintings.

In the 'Dispersed Humanoids' diptych, groups of figures working together to carry heavy objects provide a contrast to New Zealand’s culture of individual labour, highlighting the collective approach that is central to Samoan society. Also scattered across the grid are items from around Leleisi’uao’s studio; pliers, scissors, a cup, wrench and crowbar. Unlike the other objects and figures, these silhouetted forms are represented at life-size scale, giving them a sense of immediacy and significance as tools for the serious, but fulfilling work of art-making. 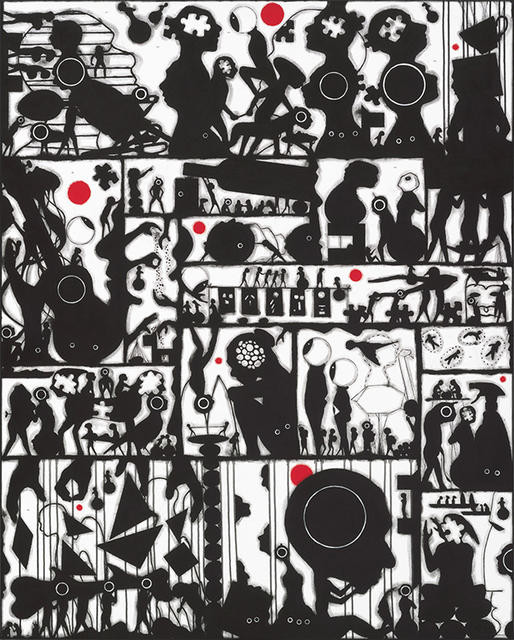