On first approach, the delicate pencil drawings in Scott Flanagan’s series Society of Accurately Enough resemble meticulously observed trees; in fact, the artist has taken his imagery from photographs of the ominous mushroom clouds that rise above atomic explosions. This conflation of the delicate and the violent, and the romantic and the apocalyptic, is further complicated by Flanagan’s choice of ground – the works are drawn on pages cut from Reader’s Digest Condensed books published between c.1960 and c.1980. The original images on each page have been partially obscured by a coat of gesso, but the borders survive, providing a constraining boundary and lending a decorative quality that seems at odds with the threatening nature of the drawn imagery. The titles for Flanagan’s works borrow from another source. They were selected from a list of phrases the writer George Orwell crossed out in an early manuscript of his famous dystopian novel Nineteen Eighty-Four (1949). Flanagan uses these appropriated materials, imagery and text to play with ideas of perception and authenticity, underlining this with his choice of the series title ‘Society of Accurately Enough’.

See the other works the Gallery owns from this series. 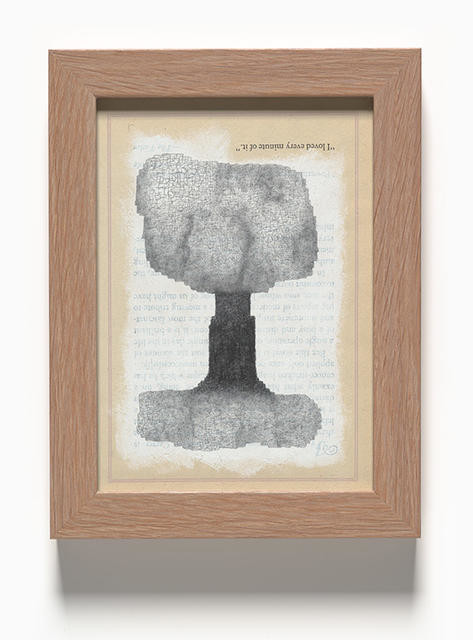