Laurence Aberhart took this photograph in March 1983, just before he left his home in Lyttelton to move to Russell in the Far North with his family. It depicts his daughters and a small family friend, framed by a niche in the wall of the cold store in a Lyttelton fish and chip shop. (The building later became the Lava Bar attached to the Volcano Café, and was demolished following the Christchurch earthquakes of 2010 and 2011.) Because he knew he was leaving, Aberhart took photographs of local places – houses, shops, old commercial signs – that he'd previously noted when driving around Christchurch and Lyttelton. ‘They were, in the main, sites that weren’t enough as a straight photograph,’ he commented. ‘And so I put people into them.’

The girls sit in a compressed space that’s too small for adults for enter. Kamala and Charlotte gaze steadily and coolly at the camera while little Astral looks off to the side, one finger in her mouth. They are serene, yet fiercely present and full of life. The recessed composition of the figures brings to mind statues placed in niches in Gothic cathedrals: it is as if they are three putti or cherubs come to life in the modern, secular world. Aberhart has described himself as a recorder of ‘a world that can’t stand long’ – the phrase comes from the song of the same name recorded by American country and gospel singer Roy Acuff in 1948. Before entering his darkroom, he often plays it. ‘This world can't stand long / Be ready and don't be late…’ A chronicler of the New Zealand vernacular, Aberhart’s world is the overlooked and the outmoded, which he continues to photograph with the same century-old view camera he bought second-hand in the late 1970s. 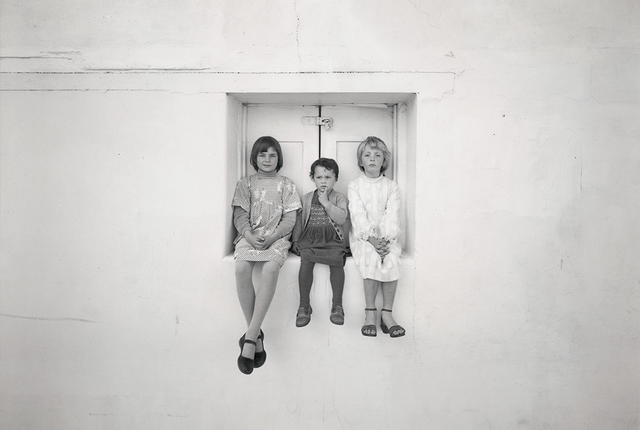