Philippa Blair has collaborated with several print workshops, including Muka Studio in Auckland and with Marian Maguire firstly at Limeworks then PaperGraphica in Christchurch. While Blair has worked with screenprints, it is lithography that captivated her and has become the most prominent form of printmaking in her work. Blair’s abstract paintings are expressive and brightly coloured with lively surfaces, and it is these elements that she successfully brings to her lithographs.

The Anasazi were an ancient American Indian people, and this work draws on elements from their culture – such as the nest-shape which references shelter and nurturing. As with Blair’s paintings, her lithographs are often heavily layered, both physically and symbolically. In Anasazi she incorporates multiple layers of tushe washes overlaid with more gestural, directly drawn marks.

Blair was born in Christchurch and graduated from the University of Canterbury School of Fine Arts in 1967. She is a prolific artist, and while painting is her primary interest she has also produced an extensive body of prints. Blair has travelled and exhibited widely, particularly in the United States where she currently lives. 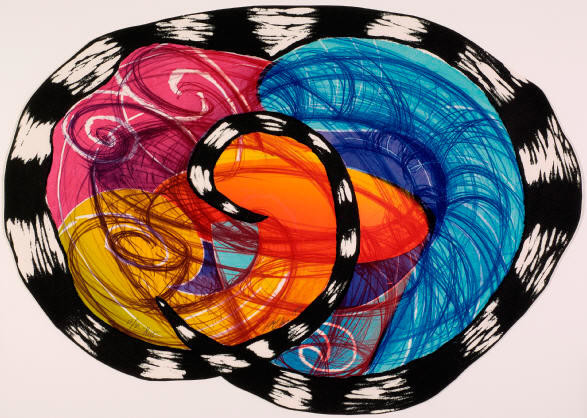