In this self-portrait Grahame Sydney is looking at his own painted image on a canvas in his studio. The canvas is surrounded by reproductions of key works from his career as an artist and the bleak Dunedin sky, coupled with the gloomy interior studio space, create a feeling of mortality. Sydney has captured the wintry coolness and his introspective mood with his characteristic attention to light and atmospheric conditions. He is best known for his realist paintings, etchings and drawings of his beloved Central Otago landscape. Often unpopulated, these landscapes create the illusion of realism and often evoke a sense of the past. Sydney was born in Dunedin and studied at the Otago University. After graduating in 1969 and spending time in Europe, he began painting full-time. In 1978 Sydney was the Frances Hodgkins Fellow at the University of Otago. Since then he has exhibited extensively throughout New Zealand. In 2004 Sydney went to Antarctica as part of the Artists to Antarctica programme. 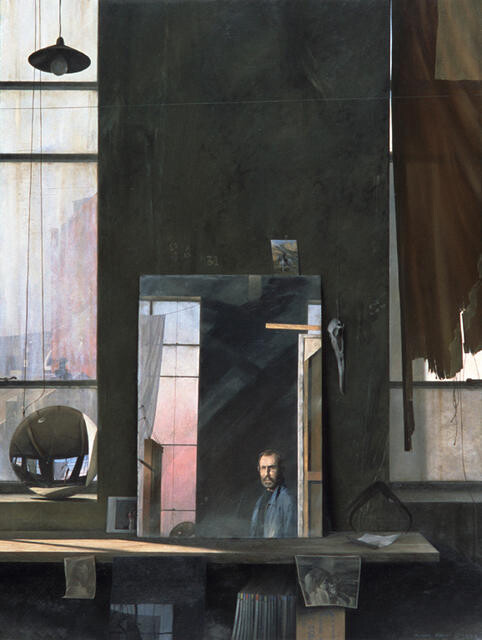