On a recent rip to Sydney I had the pleasure of visiting the Sherman Foundation in Paddington and saw a work by Sun Yuan and Peng Yu titled 'Old Persons Home' from the collection of well-known contemporary chinese art collector, Uli Sigg.

Old Persons Home consists of 13 aging world leaders driving around in the gallery in motorised wheelchairs. In a welcome change to the usual visitor/artwork interaction that physically protects the artwork with stanchions or barriers, the public are the ones at risk. Invited into the melee you soon become part of the jostle for invisible territories and power struggles being played out in the gallery space.

The wheelchairs have sensors on them designed to prevent touching, but more than once I sidestepped an incoming foreign leader, fast asleep in his chair, clutching a beercan. As the figures collide (or collude) they find themsleves alone at times and isolated, while the others clash, form alliances or are either ejected from the group - a poignant reflection of world politics. The odd metal on metal clash or the noise of rubber wheels skidding or squeeling to gain traction was the only sound in the space, broken only on my visit by a toddler that clearly wasnt enjoying the global wargame with self-propelled life-like figurines.

In the time I spent in the show a dead-ringer for Yasser Arafat headed out the door twice and had to be herded back into the space. I was told later he was the troublesome one and apparently drove up the wall and flipped at the opening.

Click here to view the work. But my advice is to turn the sound off to get a better sense of what the show is like - the accompanying soundtrack is mildly annoying and distracting. 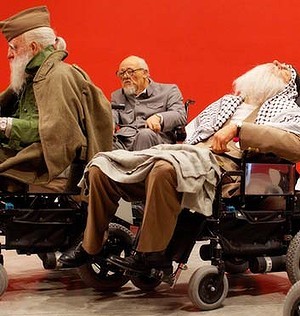