Private John Simpson found the donkey the day after the catastrophic Gallipoli beach landings. The 22-year-old Australian had just carried two heavy wounded men down the slopes to the overloaded medics when he saw the animal wandering; it was immediately coaxed into service on the shell-torn beach. Over the next three weeks, the young soldier and his donkey saved hundreds of lives, delivering victim after unlucky victim to receive urgent medical attention. Horace Moore-Jones had also landed at Gallipoli on 25 April 1915. Already a well-known artist in New Zealand, where his family had moved from England in 1885, he was living in Sydney but painting in Cornwall when war opened. He was 46 but, eager to enlist, subtracted eleven years from his age and coloured his hair, and exchanged Cornish coast with Turkish. There he set to work recording the terrain and mapping enemy positions before being commissioned to publish. By September 1916, ‘Sapper Moore-Jones’ was back in New Zealand. He began touring the country in 1917 with his Sketches of Anzac exhibition, a returned soldiers’ fundraiser. His accompanying presentation (previously given at Buckingham Palace) included the tragic tale of Simpson, whose life was ended by a bullet. After a talk in Dunedin, Moore-Jones was approached by the brother of Sergeant James Jackson – who had photographed the young Auckland soldier who had taken on Simpson’s donkey ambulance role, Richard Henderson – and was given the photograph that inspired this painting. Moore-Jones repeated his composition in several versions, but it was Simpson’s name and story that became attached to it. It was not until 1950 that Dick Henderson at last allowed his identity as its (equally courageous) subject to be publicly acknowledged. He died eight years later. Horace Moore-Jones himself died shortly after the war, in a tragic fire-rescue attempt in a Hamilton hotel in 1922. 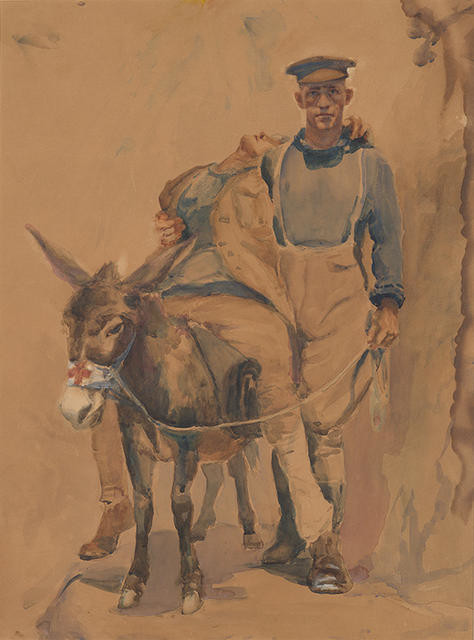