One of the oldest works in the Gallery's small textile collection is The Pascal Lamb, made by an unknown artist, which has been dated to c.1660 AD. This appliqué work (a technique where shapes are cut from one piece of fabric and applied to another) combines silver thread, satin fabric and a red velvet background to depict a common heraldic subject, a white lamb carrying a banner. The lamb is a familiar symbol in Christian art, where it is the emblem of the Redeemer and also the attribute of several saints, including St. Agnes, St. Catherine and St. John the Baptist. The subject of this particular work, the Pascal (or Paschal) Lamb, is the animal sacrificed and eaten at the Jewish Passover, a festival commemorating the liberation of Israelites from Egyptian bondage. For Christians, Jesus Christ is identified with the Paschal Lamb because the meal which became the Last Supper began as a Passover feast. Christ was then referred to as the Lamb of God: John 1:29: "Behold the Lamb of God, which taketh away the sin of the world", 1 Corinthians 5:7: "For even Christ our passover is sacrificed for us".

The Lamb in this work is shown passant, that is, walking and looking to the dexter side (the right side of the composition, which is the viewer's left) with three feet on the ground and one raised. With this raised hoof, the Lamb supports the banner of St George, the patron saint of England, whose legendary slaying of a dragon symbolised the triumph of Christianity over evil. The Pascal Lamb was purchased in 1972 from an Auckland antique dealer by Brian Muir (Director of the Gallery between 1969 and 1978) as part of a strategy (common in museological practice at that time) to contextualise the collection by augmenting historical artworks with period furniture and other domestic items. The Lamb has not survived its long period of existence without accumulating several marks of age, as the velvet background has lost much of its pile and colour intensity and the satin fabric is worn in places, revealing a coarse plain-weave support fabric behind. A slight crease down the centre of the fabric suggests that The Lamb spent at least some of its history folded in half. 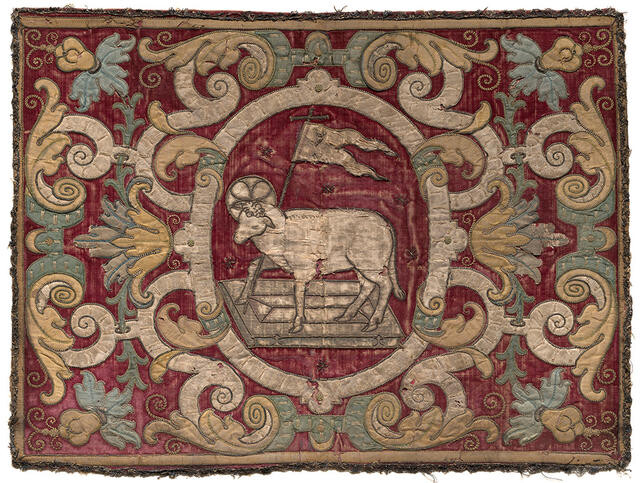 A Stitch in Time

Textiles comprise a small proportion of the Gallery's Collections, yet they span a vast time period, combining Chinese antiques and 17th century appliqué with fabric-based work made as recently as 2000. The diverse range of practice is indicative of the evolution, in form and content, of textile-based works from objects dedicated to religious worship and domestic decoration to conceptual art objects which exist outside a strictly functional context.