German painter and printmaker Albrecht Dürer began his Life of the Virgin woodblock print series in about 1500. Italian printmaker Marcantonio Raimondi saw these after moving to Venice in 1506, and began engraving copies. Infuriated by their appearance on the market, Dürer lodged a complaint with the Venetian Senate. In the preface of his completed series in 1511, he still fumed: “Hold! You crafty ones, strangers to work, and pilferers of other men’s brains. Think not rashly to lay your thievish hands upon my works.” Marcantonio had by then established a print workshop in Rome, which he ran from 1513 in partnership with the celebrated painter Raphael. This scene from The Gospel of Luke shows Mary and Joseph dedicating the infant Jesus to the Lord at the Jewish Temple in Jerusalem. The aged Simeon holds the child in fulfilment of the Spirit’s promise that he would live to see the Messiah. Alongside, the prophet Anna gives her thanks and blessing. 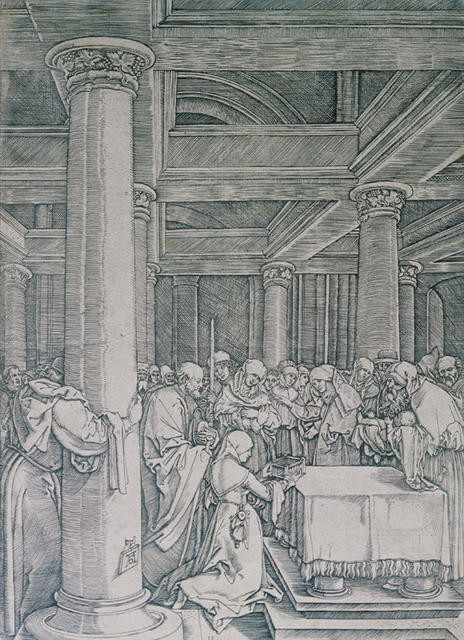