A small, sketch version of this painting titled 'Parade foraine à Kérity' locates this fairground scene in coastal Brittany, France – a region that became a magnet for many artists. For Paris-born and -based Lucien Simon, its distinctive light and picturesque inhabitants and traditions remained captivating for over half a century. Simon discovered Brittany after his 1890 marriage to Parisian portrait painter Jeanne Dauchez (1869–1949), whose parents purchased a summer retreat at the seaside village of Bénodet in 1891. Lucien and Jeanne made frequent visits, and in 1901 bought an abandoned sémaphore (navy signal house) at nearby Sainte-Marine, setting it up as a second home and painting studio, a well-used hub for many years. Simon became well-known for his affectionate portrayal of bourgeois family life (his own – the Simons had four surviving children) and of the customs of the Breton people. As well as fairgrounds, his subject-matter included village dances, courting youth, church processions, mourning, labouring and harvesting. 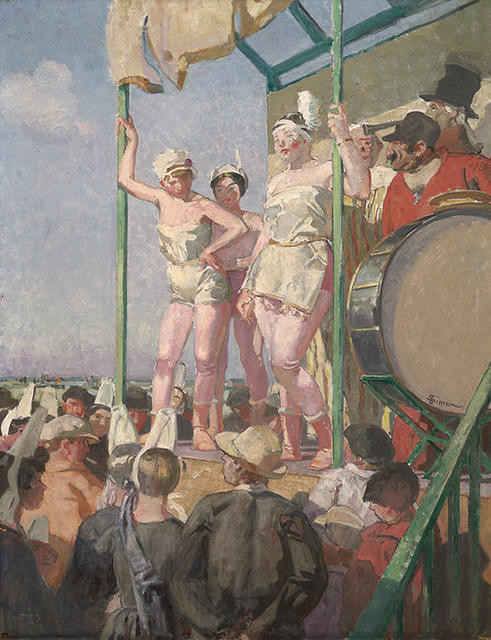