Toss Woollaston moved to Greymouth on the West Coast from Mapua in Nelson in 1949, to become a door-to-door salesman of ointments and household products – a ‘Rawleigh’s Man’. It took him many months to come to terms with the new landscape, while he painted at night and on weekends. ‘Greymouth, in from the river, looks a crowd of grey churches and buildings at all angles, with high green and bushy hills just as sharp and angular rising behind – not mine yet,’ he wrote to his wife Edith, not long after arriving.The West Coast landscape became his the following year, when he completed what he considered his first successful painting from his house on the hill in Greymouth. The new environment invigorated his work. His brushwork became looser and more expressionistic, while he described his approach to the landscape of the Coast as ‘a great violence in subdued colours’. Sunset, Grey River is an unusual elevated view of downtown Greymouth, then a bustling coal port. The setting sun floods the town and river with golden light. Masts of boats and the piers of the town bridge are depicted in rough silhouette, produced in a storm of brush strokes.‘For most of my life,’ Woollaston wrote five years later, in 1960, ‘I have known a desire to take some action to harvest the rich emotions that have come to me from landscape.’ 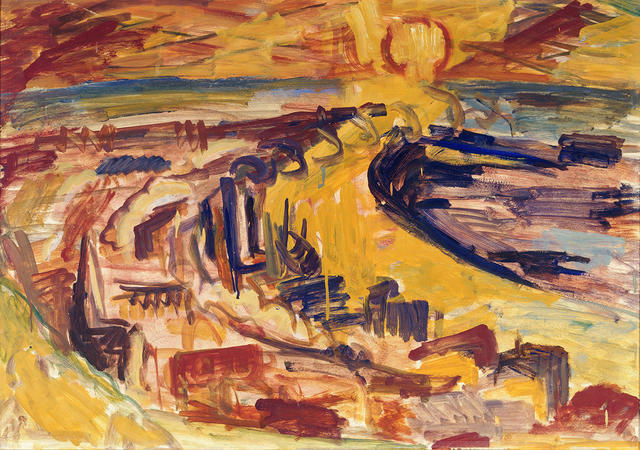